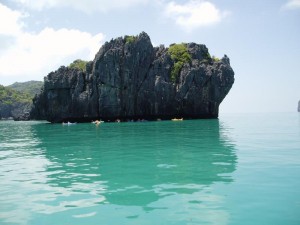 Samui Airport is a private airport built and owned by Bangkok Airways, which is still the main operator and was the only airline with services to Ko Samui from mainland Thailand since the airport’s construction in 1989. Due to its use of locally produced palm leaves and a natural, open-air cooling system, the complex received an Environment Impact Assessment Award under the guidance of Dr Prasert Prasarttong-Osoth. In 2009, the airport handled 1.3 million passengers and 17,707 aircraft operations. The airport is now additionally served by Thai Airways International to Bangkok, Firefly Airlines to Kuala Lumpur, and SilkAir to Singapore.

Flights from Samui to Phuket and other Thai destinations are also available, and in 2012, the Thai Government announced the possibility of a second Ko Samui airport due to complaints of high airport fees.

Several ferries connect the island with the mainland, including two car/passenger ferries, and connect Don Sak to piers in the west of the island, near or in Nathon. Public buses to all parts of the mainland operate from a small bus station south of Nathon. Songthaews circle the ring road, and private taxis are available throughout the island.